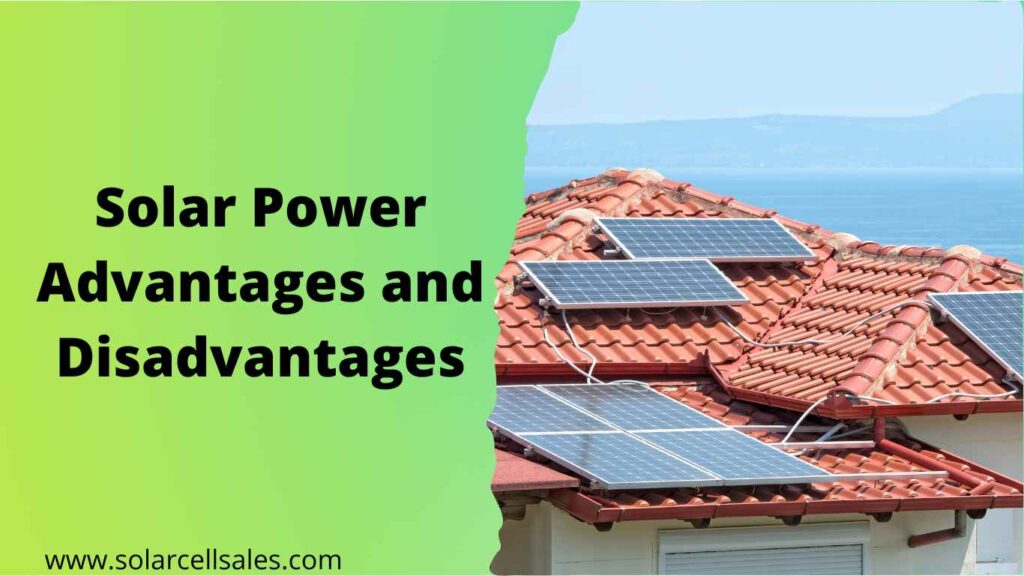 Solar power – the most important facts in brief:

Solar power is on everyone’s lips in the media and households in the US and Canada. As an alternative to polluting coal power and controversial nuclear power, solar power is one of the main types of green power. Here you can find out what solar power is, what advantages and disadvantages it has and how it can be used.

What is solar power exactly?

Solar energy, also known as solar energy, refers to the energy from the sun’s rays that people use in their homes or in industry. The energy can be used in the form of electricity, heat or chemical energy.

Solar power is energy from the sun that is stored in the form of electricity. The conversion of the sun’s rays into electricity is carried out by the technology “photovoltaic“. In the meantime, complete photovoltaic systems can even be found in every village on roofs or outdoors. The solar cells installed in the photovoltaic systems are responsible for generating electricity. The photons of the sun’s rays release electrons in the material of the solar cell, which then flow as direct current through the wiring of the system.

Why use solar power? – The advantages:

Since the sun has an extremely long lifespan, its energy is almost inexhaustible. Of course, this is not completely inexhaustible, because at some point every star and every sun burns out. But that will probably take another five billion years. Until then, the sun will provide us and millions of future generations with free energy every day.

The use of solar power emits neither particles nor CO2. In addition, solar systems have a long service life and a positive ecological balance after a very short period of use.

Lower or no electricity bill

It doesn’t matter whether you cover all or part of your energy needs with solar power. Producing your own electricity often saves you a lot of money. When buying a solar system , there are of course initial costs, but these are amortized after a few years. If you rent your solar system , the system can be installed on the roof without any acquisition costs and you can benefit from your system from day one.

Would you like to find out how much electricity you are currently using and what the electricity costs are? Our power consumption calculator will help you.

If you move and want to sell your house, the value of the house increases due to the solar system. Although some have their solar system dismantled and reinstalled on the new house, sometimes the PV systems do not fit perfectly on the new roof or the effort is not worth it. In this case, homeowners still benefit, because houses with solar roofs are more valuable and very popular.

Our tip:
In the Enpal complete package you get storage, wall box and PV system without acquisition costs. Installation, maintenance, repair, insurance, monitoring, service, replacement of the inverter and replacement of the memory are included.

What are the possibilities of using solar power?

Solar power can be used in the entire household – whether computer, refrigerator, whirlpool, light, heat pump or infrared heating. Everything can be powered by solar power. The only thing you need for this is a PV system. Once installed, you produce your own electricity for 20 to 30 years. Not only do you benefit financially, you also gain independence and protect the environment.

While the PV array is also a subspecies of solar arrays, it is the only solar array that produces electricity. Solar thermal and photochemical systems also belong to the solar systems, but do not convert the solar energy into solar electricity, but into heat or chemical energy.

A challenge in applying and using solar energy is that the sun does not shine 24 hours a day. Electricity storage devices are used so that the electricity produced during the day can also be used at night .

As an addition to solar power storage, so-called power clouds are sometimes used.

Since solar systems with storage are very important for the energy transition, there are more and more PV funding programs at federal and state level. If you would like to know which subsidies you can benefit from, simply click on your federal state and off you go:

If you do not use an electricity storage device or your storage device is already full, the excess green electricity produced is fed into the grid. You will receive a feed- in tariff from the grid operator for this. This was laid down in 1981 in the “Act on Feeding Electricity from Renewable Energies into the Public Grid” in 1981 and was then replaced in 2000 by the Renewable Energy Sources Act (EEG), which is still valid today. So you can not only lower your own electricity bill with solar power, you can even earn money.

Save money, save the world, become a solar professional:

When is a solar system worthwhile? How can I benefit from PV support programs? And how does solar energy actually work? In five short e-mails we answer exactly these and other questions. For this purpose, we have thoroughly prepared the most important topics and information about solar energy.

Charge your own e-car with solar power

The combination of wall box and photovoltaic is a true dream combination. Electric cars are already significantly cheaper to run than cars with internal combustion engines. If you then also charge your e-car with cheap solar power from your own roof instead of being dependent on expensive mains power, you can save up to 90% of your fuel costs. A wall box helps you to become even more independent, to save more costs and to be environmentally friendly at the same time.

If you want to generate and use electricity yourself, you have two options: While you could only buy a solar system in the past, you can now rent it.

Professional fitters can come to you personally for the planning. This way, all special features can be examined in detail and adjustments can be made if necessary. This is followed by assembly and commissioning. They will be at your side throughout the entire process and takes over the complete coordination of craftsmen and fitters.

So you can relax while they take care of all the steps for you. They offer every customer maintenance and repairs, as well as insurance and guarantees.

Disclaimer: Results may not be typical nor expected for every person. This is not a “get rich quick” scheme.
All information provided on this website is based on best practices and for educational-purposes only.